Within BaseClear we are working with Nanopore sequencing since 2014. And in 2017 we became the first certified service provider from Oxford Nanopore Technologies worldwide. Although we are working with this innovative and ground breaking technology for several years now, we still find many researchers that are not yet familiar with the technology and applications. For this reason in this blog we give a small background on the technology, and we discuss some current and future applications for nanopore sequencing. 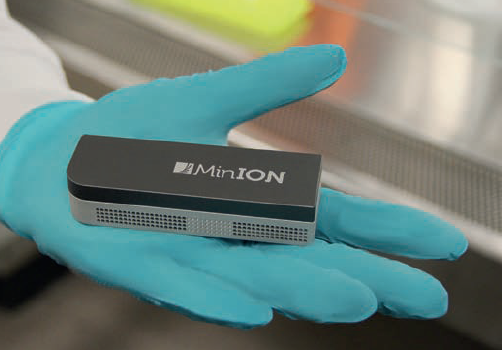 In February 2012, Oxford Nanopore’s CTO Clive Brown announced during the Advances in Genome Biology and Technology (AGBT) General Meeting the world first handheld DNA-sequencer. The presentation triggered huge media attention all over the world and many newspaper covers were dedicated to the famous picture of Clive Brown holding what looked like a big USB stick in the palm of his hand, which was actually the first MinION prototype.

The technology is based on single molecule ‘strand’ sequencing using protein nanopores and scalable electronic devices. Nanopores are holes that are so small that only a single DNA strand can pass through. By installing such a pore on a microchip and applying a voltage, the nanopore turns into a sensor that detects everything that runs through it. If you let a DNA molecule move through the pore, the changes in current reveal which of the four bases are flowing through the pore. In this way, a computer quickly and easily reads the whole DNA string.

The numbers don’t lie, the latest MinION can read 450 bases per second. In addition, read lengths with Nanopore sequencing are determined by preparation. The DNA strands must remain as intact as possible during the isolation procedure. The longest single read using nanopore technology is now approaching 1 Million base pairs. This has particular benefits when assembling large, complex genomes, improve existing assemblies or create accurate de novo assemblies to resolve challenging repeat regions.

Oxford Nanopore Technologies currently offers four sequencing systems. The SmidgION is their smallest sequencing device, and is designed for use with a smartphone. The SmidgION however is not yet commercially available, but Oxford Nanopore expects to launch this device soon. The MinION is also small and portable, having the size of a USB stick. This makes it the smallest commercially available sequencer at this moment. The MinION weighs under 100 grams and plugs into a PC using a high-speed USB 3.0 cable.  This sequencing device supports one flow cell with 512 nanopore channels. Each flow cell can theoretically generate up to 10–20 Gb of DNA sequence data.

The GridION X5 and PromethION are larger, benchtop model sequencers with higher output. These platforms are therefor used to offer Nanopore sequencing as a service. The GridION X5 is a benchtop sequencer that supports up to five MinION flow cells, so with up to 5x 512 channels. The device has an output of 50–100 Gb DNA sequence data per 48 hours. The GridION X5 allows up to five experiments to be run concurrently or individually. The PromethION is a standalone benchtop sequencer that can simultaneously run up to 48 PromethION flow cells. Each of the 48 PromethION flow cells allows up to 3,000 nanopores to be sequencing simultaneously, so in total 144.000 nanopores channels! Due to this the PromethION has a potential to yield up to 12 Tb of DNA sequencing data in 48 hours. Flow cells can be run individually or concurrently. The PromethION is now only available in the PromethION Early Access Programme (PEAP), in which BaseClear together with FG Technologies participates.

At this moment an important application includes the sequencing of large and complex genomes. The number of genomes sequenced is increasing rapidly, yet the fraction of completely closed, single contig assemblies is extremely small compared to the number of generated draft genomes. The explanation is rather easy, the costs to generate a draft genome using short read technologies (e.g. using Illumina sequencing) was manifold less than the costs associated with long read sequencing technologies. Direct sequencing of DNA with Nanopore sequencing now is affordable option for this.

So what about the development of appropriate analysis tools for long read Nanopore sequencing data? Although first successful results using Oxford Nanopore technology are now published, making reliable assemblies of microbial or other genomes remains challenging. The right preparation, coverage, software, parameters, etc. need to selected in order to obtain best quality de novo assembly results. For this the right bioinformatics expertise and experience is needed as there are many pitfalls. BaseClear is at the forefront of data analysis and in particular the published genome finishing tools SSPACE Standard and GapFiller are largely recognized by the field which is underscored by a huge number of citations. The latest assembly plugin developed by BaseClear, SSPACE-LongRead, is well capable of merging the short-read Illumina data together with long-read Nanopore (or PacBio) data into one hybrid assembly to completely close genomes. For example SSPACE-LongRead is used by a group of researchers who evaluated the utility of the MinION sequencing system of Oxford Nanopore for scaffolding bacterial genomes by comparing MinION sequencing data for two Francisella genomes: the findings of Karlsson and co-workers were published in Nature Scientific Reports (http://www.nature.com/srep/2015/150707/srep11996/full/srep11996.html).