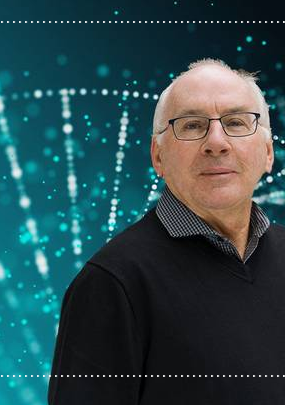 On 26 September 2018, Paul Hebert, Professor of Molecular Biodiversity, University of Guelph (Canada), will hold the public lecture associated with the Dr. AH. Heineken Prize for the Environmental Sciences 2018.

Paul Hebert will receive this prestigious award on 27 September, during a special meeting of the Royal Netherlands Academy of Arts and Sciences (KNAW), for his major contribution to the development of DNA barcoding. DNA barcoding is a method of species identification and discovery using a short section of DNA from a standardized section of the genome.

DNA barcoding forms the basis of a spin-off that Naturalis Biodiversity Center has founded, along with Institute of Environmental Sciences, Leiden University, KWR Watercycle Research Institute and Baseclear. This spin-off will be officially launched after the public lecture.

Chairwoman is prof Louise Vet, Director of the Netherlands Institute of Ecology (NIOO) and Professor Evolutionary Ecology at Wageningen University and Research.

The lecture by Paul Hebert, entitled ‘A mission to preserve planetary biodiversity’, deals with the origin, the current state of affairs and the future of DNA barcoding.
We share this planet with millions of multicellular species, the offspring of lineages which have survived and diversified for half a billion years. They now confront an unprecedented situation – a mass extinction event driven not by a physical cataclysm, but by a species. Humans have become the dominant agent of biotic change; extinction rates are now at least 100 times above background levels. We are destroying the books of life.

Until recently, life’s sheer diversity, the fact that millions of species await description, represented a serious barrier to action. Genomic science is now empowering humanity to conquer this barrier; it will allow us to complete the inventory of species in a few decades rather than a few millennia.

This progress rests upon the discovery that DNA barcoding, the analysis of sequence diversity in short standardized gene regions, enables the automation of specimen identification and species discovery. By revolutionizing our ability to inventory biodiversity, DNA barcoding will allow the activation of a global bio-surveillance system tracking our impacts on life in near real time. Its launch will advance our ability to rescue threatened species while also ensuring we retain genomic records for those which cannot be saved. Through such action, genomic technologies will transform biodiversity science with important implications for humanity and the species that share our planet.

We invite you to join us. Reserve your seat.

Looking forward to meeting you on the 26th!